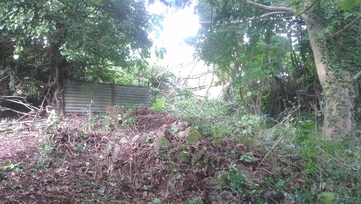 The main aim of this project was to reclaim a very overgrown area of land on a steep slope, and transform it into something more functional.

The exact use was yet to be decided but the brief was fairly straightforward; clear the land and create some flat tiers.

For the retaining walls we were to use blocks faced with stone that lay around in piles on site. This was to help ensure the new area was in keeping with the rest of the garden. 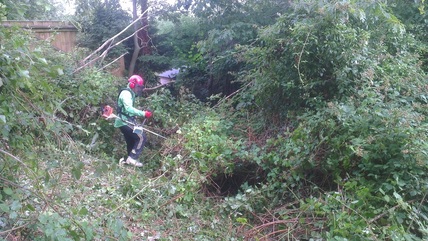 The site had been neglected for many years and so the foliage was extremely dense and overgrown. At least two days were spent on clearance with strimmers and chainsaws to expose the majority of the site.

One large tree had recently been felled towards the top of the site and so stump grinding was carried out on the second day to ensure the digger would not have any problems moving material around.

We also discovered an old corrugated composter which required digging out. The compost was of high quality and so as much of this was bagged up for the client as possible. 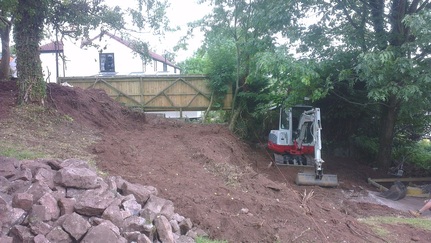 A three tonne digger was hired in as there was a considerable amount of levelling to be done. Fortunately the soil was good and we only hit bedrock at the lowest point we needed to achieve on the upper tier.

Using the digger we also ensured that any remaining roots were scraped away and then raked out for disposal. 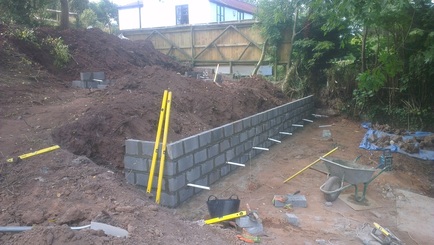 Due to the considerable slope of the original site it was important to make sure that the walls were up to the task of retaining what they were supposed to. A little extra effort and expense at this stage can make the difference between a functional garden wall and one that moves and cracks over time.

Deep and wide footings were dug with the digger and approximately three cubic metres of concrete was delivered ready mixed. The footings continue a short distance perpendicular to the main wall to allow the wall to follow this line for additional strength and longevity.

The blockwork was laid with regular weepholes to ensure that water build up would not compromise the walls structural integrity in the future. 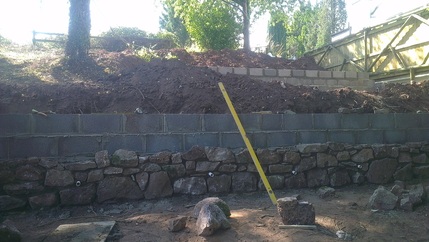 All the stone used in the wall was uncovered on site and cleaned up to ensure the mortar binded the stone well. The stone was extremely varied which slowed construction a little but added to the rustic finish which was the desired result.

A brushed render finish was decided upon for the top of the wall to prevent water from getting in and damaging the wall. This finish worked well with the old reclaimed stones, where a more formal finish such as coping stones would have looked out of place. 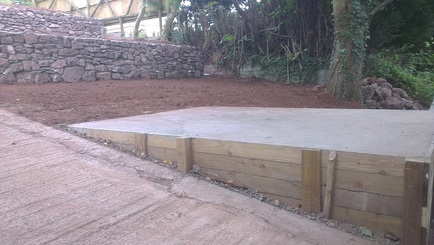 On the lower tier a substantial concrete pad was required to accommodate a very large and heavy oil tank.

This required a considerable amount of shuttering to bring the ground to level and ensure that the two cubic metres would have a smooth finish around the sides with no 'bulging'.

The concrete delivered was of a different type to that used for the footings, and reinforced with steel to ensure the required strength was achieved. 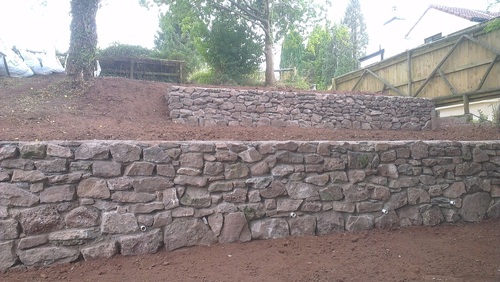 The project took roughly two and a half weeks to complete from start to finish.

When constructing retaining walls no shortcuts can be taken if they are to stand the test of time. Footings and drainage must always be the first consideration before looking at the finish.

We were very pleased with the final result and I believe that the reclaimed stone found on site, combined with the brushed render finish, helped transform the area into a more functional space that ties in well with the surroundings.