Driveway and landscaping in Redland 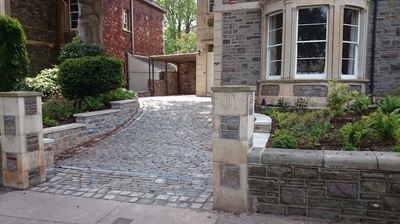 This was one of our largest projects of 2014 involving a major reconstruction of an old driveway and front garden. The existing driveway consisted of old tarmac and walls that were too tight for easy access by car.

Our brief was to improve access whilst creating an attractive finish that ties in with the old Victorian house and area. The client had already decided on using cobbles for the driveway itself.

A very large adjacent tree with a protection order was to create a few challenges, as was maintaining access to the house for the client and their family throughout the project. 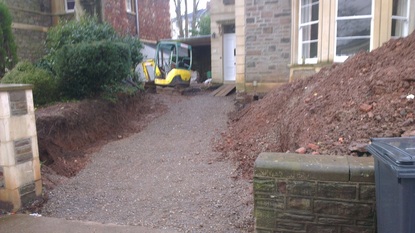 One of the most important stages in constructing a new driveway is to ensure sufficient depth of sub base. Without a deep layer of compacted stone on which to construct the driveway problems will occur in the future.

In the end approximately 60 tonnes of material was removed from the driveway and around 12 tonnes of stone scalpings brought in and compacted. We always make sure that we get the layer of compacted stone in as soon as possible to keep mud and dirt to a minimum.

The right hand pillar was also dismantled so that the entrance could be widened to help with the access issues. 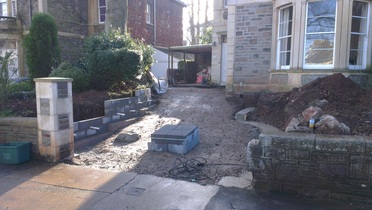 The new driveway would cover more than 50 square metres and so for this non-permeable type of driveway an effective drainage system was required. The existing carport also had a downpipe leading nowhere which needed attention.

The roots from the protected tree meant that running drainage pipes beneath the driveway was problematic. Our solution was to create a soakaway for the carport and to tap into the existing mains drain via an 'aco' drain running across the bottom of the drive. 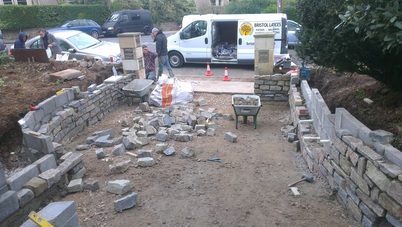 The right hand pillar was dismantled and rebuilt to create a wider entrance as it was previously a little too narrow for most cars.

The stone for the retaining walls was selected from a few different varieties to provide some colour variation that would help make the walls stand out from the cobbles.

Concrete coping stones were used to keep the costs down, which would soon weather in to achieve the desired finish. 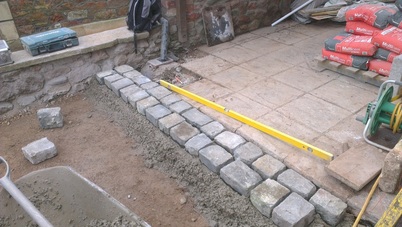 The client had specified that they wanted a cobbled driveway and so we sourced a number of samples from local suppliers.

Reclaimed granite cobbles were decided upon and, to create some more visual interest, we asked the supplier to separate out two different varieties. Some larger, more square shaped cobbles were used around the perimeter of the drive and then regular, oblong shaped cobbles for the remainder. 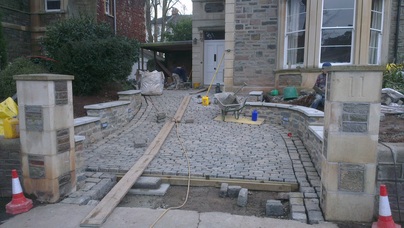 The cobbles were laid on a mix of recycled stone dust and cement for maximum strength and workability.

Due the extensive root system of the protected tree the slope of the driveway was non-linear. The challenge here was to prevent any chance of vehicles becoming grounded whilst maintaining a naturally curving slope.

Pointing the joints was carried out by hand rather than using a brush in product. This was very labour intensive but necessary as the client wanted a natural shade of pointing as well as a recessed finish. 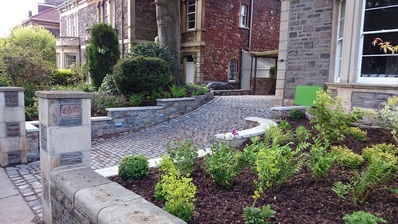 It was a pleasure to work with the beautiful reclaimed materials used on this project and the result is a testament to both the clients vision and our own care and attention throughout.

The new driveway really does complement the lovely Victorian property and local area. Everyone involved, especially the client, is extremely pleased with the result and this will be something that can be enjoyed for many decades to come.