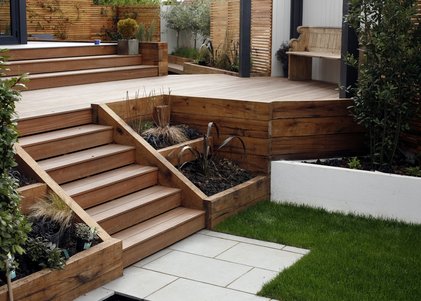 Completed early 2017 this was our largest project to date by some degree.

Although an initial design was in place prior to our involvement in the project the final design evolved over time both before work commenced and throughout the construction phase itelf.

Our client had a great deal of involvement in this process and we worked closely together to ensure an ambitious and varied landscaping project was fully realised. 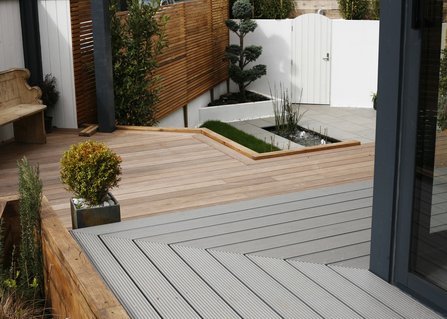 The front and back garden spaces were fairly distinct projects in their own right; the front based on a more traditional style and the back offering a highly contemporary feel combining style and functionality. 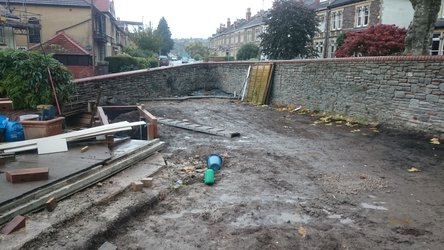 A large space with natural stone perimeter walls, the front garden also contained a 'challenge' in the form of a large garage roof which had previously dominated the space.

Parking in the area was becomming more and more of an issue and so the decision was taken to incoporate off street parking into the design. This involved taking down and rebuilding a long section of the stone wall and dropping the kerb outside.

The remaining space would consist largely of lawn. Oak sleeper beds, harwood decking and artificial grass were employed to disguise the garage roof and tie the front garden together. 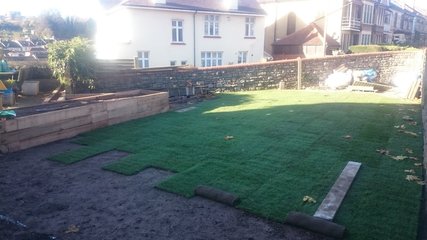 Levelling the lawn areas (and ensuring sufficient depth of good topsoil) required excavation and delivery via grab lorries over the boundary wall (approximately 70 tonnes of material in total).

The existing Victorian paved path was repaired as refreshed and additional gravel paths installed, edging with reclaimed Victorian pavers to tie in with the existing traditional look and feel of the space. 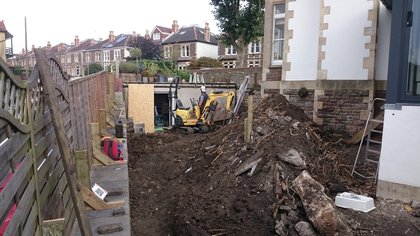 Although smaller in scale the rear garden would involve considerably more work to achieve the desired result.

The new rear garden would consist of four distinct terraces; an upper balcony area around the new extension, a sunken communal area, a main central area of decking for entertaining and dining, and a lower area containing lawn, paving and water feature.

The different spaces would incorporate a range of materials and be linked together by various sets of steps. 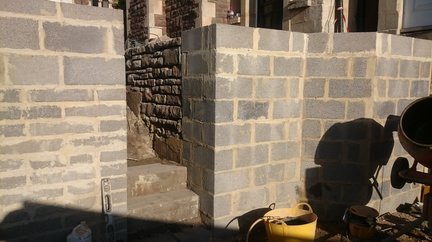 After initial excavation was carried out the next job was to install some substantial retaining blockwork walls (which would eventually be rendered and painted). Being close to the house a structural engineer was consulted and the walls built using a 'pinned' system with steel bars for additional reinforcement.

A set of reclaimed flagstone steps would bisect the new walls and the existing natural stone rebuilt along the side to provide a transition between the traditional (front) and contemporary (rear) spaces. 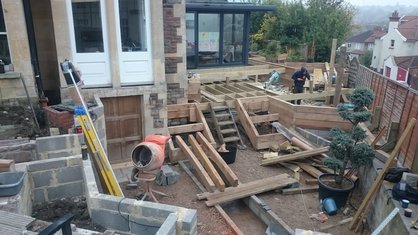 One of the most challenging aspects of the whole project was making sure all the different levels were set exactly right and that the different areas linked together as planned.

An extensive timber framework was constructed for the areas of decking and steps and to support the oak pergola and boundary fencing.

Oak sleepers were also used throughout to provide raised beds, retaining walls for the main steps and for access to storage areas under the deck. 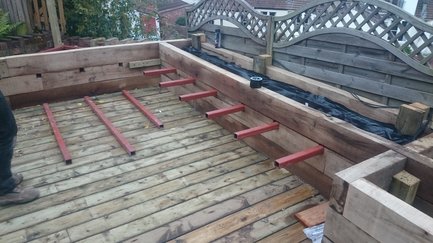 A number of bespoke solutions were required including an 'L shaped' floating bench which was constructed using hollow steel bars clad with balau hardwood deck boards.

Under deck storage was to be accessed via a sleeper hatch that blended in with the surrounding raised beds. 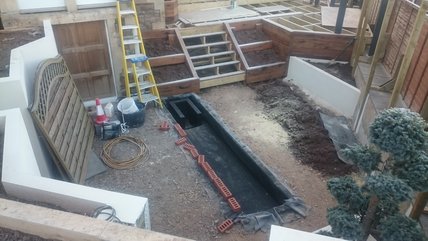 Contemporary limestone slabs would provide the main surface for the lower garden area, framing the new coy carp water feature. The carp themselves were housed temporarily throughout the project whilst their new home was being constructed.

A small lawn area would help soften the space as would the subsequent planting carried out by the clients.